It’s 2020 – we are trying our best to physical distance to keep everyone around us and ourselves safe. Other than binge-watching TV shows, it’s the perfect time for self-care, self-reflection, and self-improvement. It’s also the perfect time for us to take up hobbies and learn new skills (some more useful than others).

Here are some skills and hobbies that are on my list. Let’s check them off together!

What hobbies and to-learn skills are on your list?

Find and Replace in R, Part 1: recode in the library car

R function to adjust p.values and show only thresholded correlation coefficients in matrix

Check out other useful R tips and tricks here!

What is the False Discovery Rate?

When correcting for the multiple testing problem, you’ve probably been familiar with the stringent Bonferroni correction.  You’ve also probably heard of the False Discovery Rate (FDR), but what is the main difference between the two corrections?

I was browsing around for a simple explanation and came across the totallab website (see below).

[FDR] controls the number of false discoveries in those tests that result in a discovery (i.e. a significant result). Because of this, it is less conservative than the Bonferroni approach and has greater ability (i.e. power) to find truly significant results.

Selecting and visualizing only significant correlation coefficients in matrix

Updated:
Better Alternative for plotting:
plot with cor.plot also from the psych package – I realized that it is more flexible as it handles missing values (NAs) better than the corrgram().
cor.plot(sig_element)
# or
cor.plot(sig_element, show.legend = TRUE, main = “title”, numbers = TRUE, labels = names)

Check out other useful R tips and tricks here!

It is common for researchers to exclude participants with missing data — but what are some ways to keep the participants and analyse the data in unbiased ways? 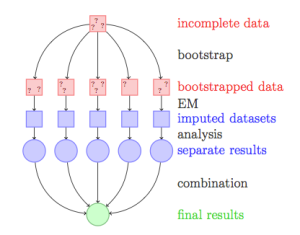 2. Include variables that are highly predictive of the variables you are going to analyse
e.g., Voter turnout analysis: ideology — e.g., include views on homelessness, abortion (predictors of variables you’re interested in)

3. Include variables that are highly predictive of the missingness of your data
e.g., income the predict missingness — throw it in model as well

“…Because you are throwing in a lot of variables in the imputation model than the variables you would be looking at the analysis stage and that’s OK!”

“When working with binary or ordered categorical variables, it’s often acceptable to impute under under a normality assumption and then round off the continuous imputed values to the nearest category. Variables whose distributions are heavily skewed may be transformed (e.g., logs) to approximate normality and then transformed back to their original scale after imputation.” – the multiple imputation FAQ page

There are many softwares to do multiple imputations, but if you use R, you can check out AmeliaII
cran.r-project.org/web/packages/Amelia/vignettes/amelia.pdf
– the user guide is very clear and helpful – can run through the example dataset and code.

video – Innovation in Amelia I (explanation of multiple imputation in general): http://vimeo.com/18534025

How to Calculate R-squared Change in R

# first, remember to install and load the package.
install.packages(“lmSupport”)
library(lmSupport)

# compare the two models!
# to get the R-squared change and other stats
lm.deltaR2(model1, model2)

You can check out this forum for more information: http://stats.stackexchange.com/questions/37785/does-lm-use-partial-correlation-r-squared-change

But, what do you do when you want to find out if at least two or more of the conditions are true?

You take advantage of the Boolean math!   Here’s how:

# for at least two of the conditions being true

For more, check out: https://psycnotes.wordpress.com/at-least-2-or-more-boolean-conditions/

Now, I also have another post about Debugging in R, which uses the debug()

I’ve updated the R page on the following topics:

How to Debug a Function in R

I’ve updated the R page with the two following entries:

How to recode variables in R (reverse-coding)